"May the Wings
of the BUTTERFLY,
Kiss the Sun."
~ Ancient Blessing

"May the wings of the BUTTERFLY
Kiss the Sun and find your shoulder to
to light on to bring you luck,
happiness and riches
—today tomorrow and beyond."
~  Ancient Blessing 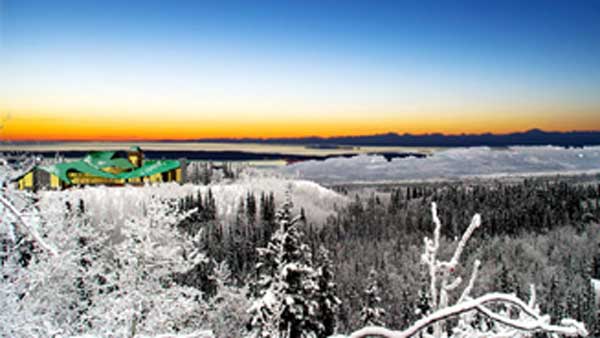 The building’s form and siting take advantage of passive and active solar gain, and water and earth energy (geo-exchange). Government House's butterfly “wings” trap the sun. All areas have been carefully designed to integrate with the natural surroundings to give this prominent, sacred site a strong sense of place and order.

The building is oriented to the skyscape. Its sweeping curved beams in the council chambers follows the arch of the sun and its feature circular windows aligned with the summer and winter soltices. It is reminiscent of past Northern Tutchone building practices with its circular shape and sweeping curved beams acknowledging the arc of the sun and recalling historic willow structures. The curved beams represent the four cardinal directions. The round windows highlight each quadtrant, align with the summer and winter soltices, and bring light into the heart of the Council Chamber.

The First Nation is committed to the principles and practices of environmental sustainability. Government House has been constructed as a healthy, energy efficient building. In keeping with a sustainabilty mandate, it was self-built by the First Nation utilizing local resources and community labour. 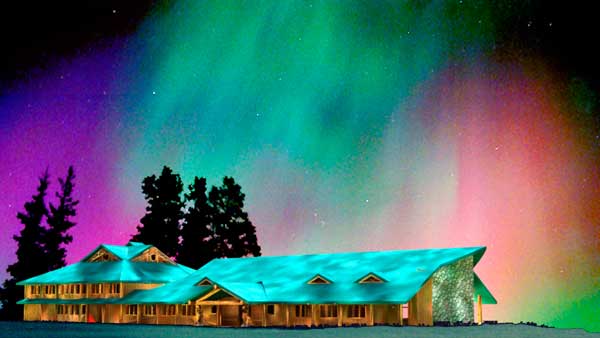 INTRODUCTION
With its spectacular scenery, abundant wilderness resources, and its ideal location for viewing the awe-inspiring Northern Lights and Midnight Sun, Mayo is one of Canada’s unique regions. The community is surrounded by majestic mountains, pristine lakes and rivers including the Stewart and Mayo Rivers.The Stewart River called Na-Cho Nyäk—Big River—in Northern Tutchone is the namesake of the First Nation.

The Na-Cho Nyák Dun have lived and trapped near the confluence of the Stewart and Mayo rivers for centuries. Since "time began", the “Big River People” have subsisted sustainably on the land, using the rich supply of game animals, fish, birds and vegetation in the area. Their "ancestors lived in a balanced way with the environment and animals (In ECOLIBRIUM), traveling according to the best food sources.

There was a "spiritual relationship with animals that was honoured by traditions that had to be observed to keep that relationship strong. " ( Na-Cho Nyák Dun Tan Sothan — A Good Path Integrated Community Sustainability Plan, May 2008).

The region experiences some of the coldest temperatures and the greatest range of annual temperatures ever recorded in North America -62.2 °C (1947) to +36.1°C (1969) — yet is also home to many fragile species of alpine butterflies (Läla). The valleys surrounding Mayo and Keno receive visitors from around the world to view these “Beringian” butterflies which have become one of the planet’s “canary indicators” on world climate change.

The existing First Nation Village is located on the flood plain of the Stewart River. It is highly susceptible to flooding though protected by dykes. There are ever present problems associated with perma frost at this location. Many of the existing housing and community facilities are deteriorating rapidly due to continual movement and shifting caused by permafrost degradation.

Across the river from the present town of Mayo are remnants of the traditional First Nation village including a historic cemetery. It was the intention of the First Nation of Na-Cho Nyäk Dun to build a new community near the old cemetery on the dramatic plateau above the river valley.

The elders selected this prominent site for Government House, as it has cultural, spiritual and historic significance to the First Nation. The elders view the new now completed development site as moving back home. They feel they have come full circle; it is were the people wanted to live originally but were forced to relocate. This area (settlement lands) is also excellent for building development as it is high and dry with no known permafrost concerns.

Government House, an administration and community services building, is the first important community facility built in the new community core. It physically establishes the “seat of government“ for the Na-Cho Nyäk Dun First Nation in the Yukon.

The effects of global warming and high energy prices are pronounced in Canada’s North. The cost of conventional energy continues to increase at a rapid pace. It is an alarming trend for remote locations such as Mayo. In a region of such severe climate, the benefits of energy efficiency and renewable energy are far reaching.

Government House employs a community wide geo-exhange heating system in conjunction with passive and solar systems, super green envelopes and other sustainable and healthy building strategies which will lead to substantial greenhouse gas emissions reductions and savings in traditional energy use. Goverment House is a flagship facility in helping to establish the new commmunity as an eco-village.

Functionally similar activities are clustered around common use areas. A distinctive front entrance leading to a common lobby area divides the administrative and community use functions which includes a multi-purpose room that can accommodate large group gathering up to 120 persons.

General Administration is conveniently located off this lobby as well as a lunch area and a servery kitchen that can be also used by community members.

The multi-purpose room has been designed as a flex space so that it will be able to be easily converted to future office functions. The main floor houses General Administration, Capital and Housing, Social and Education, Land Resources and Heritage, Implementation, Enrollment, Economic Development and a number of rental offices. An elder’s “fireplace lounge” has also been provided as a focal point at ground level at this floor level’s most prominent location. The lounge is located to take full advantage of the panoramic views, sunrise and sunset.

The upper floor houses the Council Chambers, Chief and Council Offices and Finance Department. Also on the second level there is access to a roof deck which is for office and general community use. One of the staircases has been designed to accommodate a fire and communications tower and will also serve as a community fire observation tower.

A SELF BUILT PROJECT
Fifty five individual Na-Cho Nyäk Dun citizens participated in all phases of this sustainable development project. There were directly involved with the construction as were many local companies. Almost every construction crew, from pouring concrete, to framing, instatllation of the siding and roofing was First Nation. The project overall had a significant impact on the local Mayo economy. 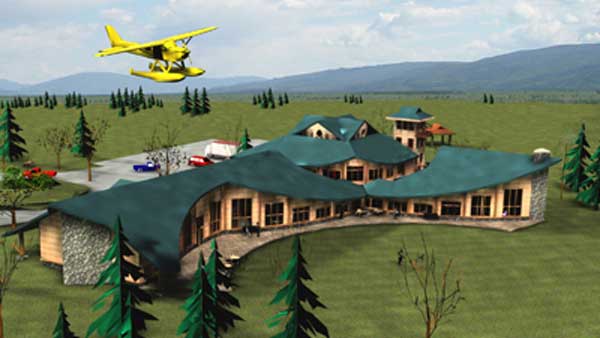 DESIGN CONCEPTS
Sustainability has been a key guiding principle for the development throughout the planning, design and construction phases. It integrates planning, architecture and environmental design through such measures as:

The Council Chamber Drum is reminiscent of past Northern Tutchone building practices with its sweeping curved beams recalling traditional winter structures. The beams represent the four cardinal directions with a circular window placed in each quadtrant to align with the winter and summer soltices.

The building’s form and siting take full advantage of passive solar gain. Its “wings” trap the sun. The design concept emphasizes the dramatic bluff location, views, historic trail linkages within the site, and high visibility of key administrative functions. All areas have been carefully designed to integrate with the natural surroundings to give this sacred site a strong sense of place and a well-defined order.

The building’s different facades are designed to respond to solar access based on the particular orientation. Windows are carefully placed to capture the sun for heat and natural daylight. North and east facing facades have smaller “punched windows”, west windows have been minimized to prevent overheating in summer months. South glazing is maximized and employs a double zone system to allow one space to temper the heating and cooling needs for the adjacent space. 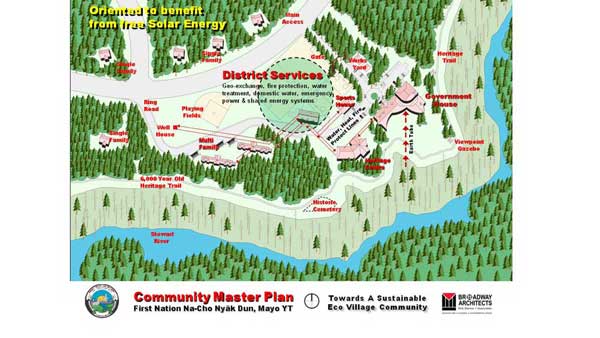 GEO-EXCHANGE, EARTH TUBES, SOLAR SYSTEMS
The First Nation of Na-Cho Nyäk Dun will be incurring significant expenses to heat and cool community facilities and residences unless alternative strategies are employed. The village of Mayo is on one of two isolated hydro-electric grids in the Yukon. Besides hydro-electric energy, the community (like most in the Yukon) relies on heating oil for boilers and furnaces and woodstoves for some residential heating. Most large buildings in the Yukon draw electricity from a hydro or isolated diesel grid and rely on oil-fired boilers for heat.

The use of affordable and clean renewable energy sources, along with other sustainable building practices are promoted in the Government House project. The location for the Government House on a plateau above the town of Mayo offers superb exposure to the sun due to the raised location and southern orientation. The site is situated above a known 8°C aquifer. Government House is oriented to take full advantage of all these attributes. The nearby hillside also allows the installation of underground ventilation shafts (Earth Tubes) that will pre-heat/cool air being drawn in for ventilation.

An open loop geothermal system is employed for heating and cooling Government House—resulting in energy savings and  reduced  greenhouse  gas emissions. Given the cold climate in Mayo with a design temperature of -50ºC, geo exchange provides a cost effective and reliable heating system. The heat pump system uses well water that is delivered from the site well to the community district services building in an insulated pipe that serves the domestic water and fire protection water as well. The water passes through cleanable plate heat exchangers in the services building and is re-injected into the ground through a separate well located sufficient distance from the supply well and downstream with regards to flow through the aquifer being tapped.

A pumped closed loop with water and antifreeze solution draws heat from the heat exchanger and delivers it through an insulated main to all the major buildings in the new community. Each building including Government House uses heat pumps drawing heat from the loop in the winter and dumping heat back in the summer, to provide building heating and air conditioning.

A PVC Solar Collector System was installed on the Government House roof's south facing elevations in 2017. The system is 27kWh and designed to deliver close to 30,000 kWh per year for use by the building with surplus generation flowing back to the grid for with an annual reimbursement rate estimated at 21¢/kWh.